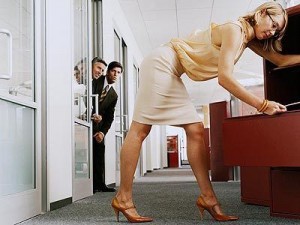 Statistics show that most women fail to confront their bosses about sexual harassment. This is a mistake.

When a woman wears tight or provocative clothing at work, and is thereafter sexually harassed by a male manager or coworker, will that fact hurt her sex harassment case? This is an especially important question in Orange County, where California culture encourages working women to wear shirts that show a little cleavage and skirts that show off some leg.

Some men believe that when a woman wears tight clothing, revealing blouses, or a short skirts, she is seeking sexual attention. Many believe that she “asked for it” and that they should not be punished because she “led him on.”

California’s hostile work environment laws state that the harassment must be “severe” or “pervasive” and is evaluated on a “totality of the circumstances” scale. These legal constructs allows judges, juries, mediators, and arbitrators to evaluate just about anything they want in deciding whether sexual harassment has occurred.

As a result, society, judges, juries, and arbitrators, often blame the victim for encouraging the harassment. These decision makers have, on numerous occasions, decided against employees on the basis of conduct they see as encouraging the harasser such as, using sexual language & mannerisms around the person who allegedly harassed them, wearing tight & revealing clothing, failing to make complaints after harassment allegedly occurred, and initiating social contact with the harasser after the harassment has occurred.

So yes, wearing provocative clothing may hurt a sexual harassment case. But does it sink a case? Absolutely not. There are many rules built within the court system to protect women in this regard. Furthermore, a good sexual harassment lawyer will have many tricks to minimize “bad facts” such as this. That is why it is so important that you hire an employment attorney rather than a generalist.

On a related note, a big court decision came down in Iowa addressing a similar issue a few days ago. The case doesn’t affect the legal rights of California employees at all but gives me a good excuse to write a blog post. The case is Nelson v. Knight.

The issue raised in the case concerns “whether an employee who has not engaged in flirtatious conduct may be lawfully terminated simply because the boss views the employee as an irresistible attraction,” Justice Edward Mansfield wrote for the all-male court.

In Nelson v. Knight, the employer claimed that the employee wore tight clothing that led him on:

On several occasions during the last year and a half when Nelson worked in the office, Dr. Knight complained to Nelson that her clothing was too tight and revealing and “distracting.” Dr. Knight at times asked Nelson to put on her lab coat. Dr. Knight later testified that he made these statements to Nelson because “I don’t think it’s good for me to see her wearing things that accentuate her body.” Nelson denies that her clothing was tight or in any way inappropriate.

Basically, the Iowa Supreme Court found that a boss can fire an employee simply because he finds her attractive and see’s her, fairly or not, as a threat to his marriage. Unfortunately, this is already the law in California, as California it is an “at-will employment” state. An employee can be fired for just about any reason, except for the impermissible reasons outlined in California’s Fair Employment & Housing statute (Govt Code 12900).